Anathema's (Skrba's) GORA was the granddaughter of Auclair's CH TOM (imported from Canada), which became the cornerstone of several highly successful breeding programs in the Balkans, where he is known as CH. Black Tom. Current Gora bore the blood of another APBT, which has left an indelible mark in the European pitbulls B & S CH TOM (known as Krkeljic's (Scepovic's) CH TOM).

As we stated in section Our breeding, at the beginning we experimented with representatives of several bloodlines APBT . The properties, which we have at most prized pit bulls were mainly :

Dog , which had all the this qualities was for us ideal of a pit bull . Our Gora above mentioned qualities possessed , current , which was for the future and breeding more importantly she their qualities reliably transmitted to offspring.

Gora has been crucial to our future breeding program of APBT. Based on the properties, which passed to his descendants we decided in 2002 to focus on the utilization of its genetic potential attempt to create a custom bloodline pit bull, which we named G-line.


Gora (our basic breeding female) was breed with this five stud males (chronologically):

- when died Phil Aris - legendary American dogman , were rescued two of his dogs , which have Phil Aris extremely valued , one of them was Charlie (Frank), which was donated by Black Bart and subsequently imported to the Czech Republic, pedigree Aris CHARLIE here.

- grandson of Gora, APBT possessing exceptional power, this was in contrast to larger with its very friendly towards humans

- direct son of Gora, which emerged from breeding with Komany's CASTRO, his father gave him his character

The last living direct descendant of Gora, which can be seen in our kennel is female Anathema's G-LINE HONEY derived from the last litter (born in 2005).


Ed.:
In some pedigree is Anathema's (Skrba's) GORA erroneously cited as the Srba's GORA and her daughter Anathema's CALIENTE rooted Anakreon's CALIENTE. 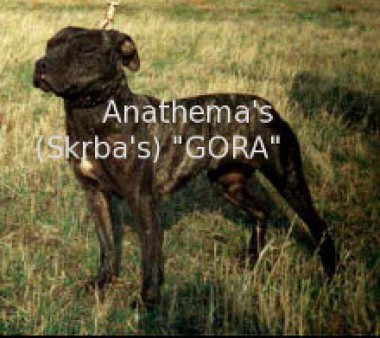